This Is The Greatest Place In The Known Universe. Take One Look And You’ll See Why.

Share the post "This Is The Greatest Place In The Known Universe. Take One Look And You’ll See Why."

Ōkunoshima, Japan, is a place that you’ll want to see before you die. Why? Because it might just be the cutest place on earth.

It’s known as Rabbit Island and that’s because it’s inhabited by hundreds of adorable bunnies. A couple decided to go camping on Ōkunoshima, and they got up close and personal with some of the adorable residents.

You’ll be so jealous.

The couple was biking through Japan when they decided to stop at Ōkunoshima.

It is about 40 miles east of Hiroshima, then just a short 10 minute ferry ride.

There are hiking trails and campsites that visitors frequent, but the real attraction is the rabbit population.

The feral rabbits living on the island are quite tame and will approach humans.

Especially if you have some snacks to offer them.

They were a big fan of the snacks.

The rabbits were allegedy used to test chemical weapons during WW2.

The island was even left off the map, a hidden secret.

But after the war, when the experiments ended and the plants shut down, the rabbits were released.

Although, there is now a hotel, a six-hole golf course and a small camping ground.

Visitors are also able to swim in the clean water surrounding the island, regardless of the tide.

When they’re not too busy playing with the rabbits, that is.

The staff keeps the island clean and well maintained, even though there are a lot of bunny droppings around.

Visitors can buy rabbit food for the residents while they are there.

Any visit would basically be a never ending stream of cuteness.

Which is why you should probably visit this island at some point. 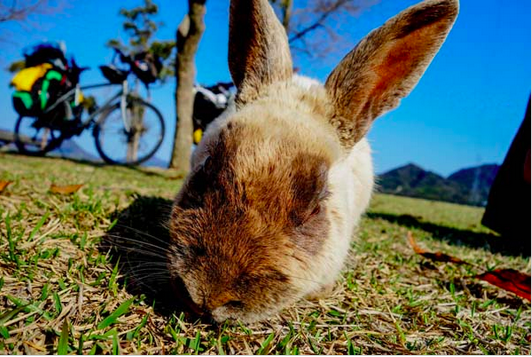 Rabbit Island may be a world away for most people, but the allure of a remote island filled with hundreds of adorable, friendly rabbits? That’s real motivation to take a vacation. Ōkunoshima should go on your bucket list.

Share the post "This Is The Greatest Place In The Known Universe. Take One Look And You’ll See Why."

LIKE US ON FB 🙂
« Here Are 50 Adorable Baby Animals Organized By The State They Represent. Which One Is Yours? » Apparently You Can Order Absolutely Anything Online. Just Look At What This Guy Got.