Why Drinking Brings Out The Truth. The Science Behind What You Said Last Night.

Share the post "Why Drinking Brings Out The Truth. The Science Behind What You Said Last Night." 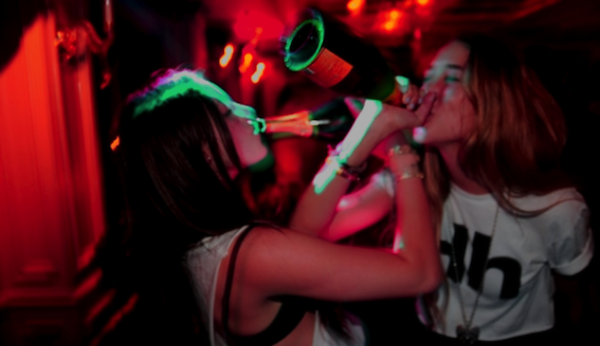 No you’re not in church. You’re not witnessing a murder, and you’re definitely not having an orgasm. Those are just the words you utter during the morning recollections of last night.

These are the words you’re whispering to yourself or shouting aloud as you lie in bed, hands over your face, trying to hide from the memories.

Why the f*ck did I say that? You most likely ask yourself aloud, or to your best friend sitting there as you nurse your hangover.

Why the f*ck did I text that? You delete the messages the same way you wish you could erase the hazy (yet, all too clear) memories. But even with a blank phone screen, the truth is still there, staring you in the face.

Because as much as you wish to deny it, it was the truth. Those drunk ramblings weren’t just random thoughts and ridiculous notions. What your drunk mouth was spewing were all those thoughts your sober mouth didn’t have the guts to.

According to Bruce Bartholow, author of “Alcohol Effects on Performance Monitoring and Adjustment: Affect Modulation and Impairment of Evaluative Cognitive Control,” alcohol doesn’t make you behave badly, it just makes you care less.

For all of you trying to apologize or rectify some misspoken words, the excuse, “I was drunk, I didn’t mean it” doesn’t cut it anymore.

Bartholow, an associate professor of psychology at the University of Missouri College of Arts and Science, concluded that alcohol dulls the brain’s “alarm signal” that warns you when you are making a mistake. These dulled warnings are what lead to the loss of self-control we often regret after one too many.

If you think back to that moment you were saying all those things you wish you could take back (if you can remember them, of course), wasn’t there a part of you that knew what you were saying?

Only, at that moment, you didn’t care about how much it was going to hurt the other person… or you.

Because that’s what drinking is all about, isn’t it? A whirling, tumbling gamble of life? We throw away all our inhibitions and knowingly drown ourselves in a liquid that, at certain levels, is poisonous enough to kill us. Is it a form of self-destruction or the only way for us to release?

Is poisoning ourselves the only way to tell the truth?

In his experiment, Bartholow and his team administered alcoholic beverages to one third of a group of 67 participants (ages 21 to 35), no alcohol to the other third and a placebo beverage to the last group. All participants were instructed to complete a computer challenge that was designed to cause errors.

As predicted, the ones who were given alcohol were less alarmed when they made the errors, and the “alarm signal” was even weaker for those with the placebo beverage (but that’s another study for another time).

Those in the alcohol group, however, were as aware as the placebo and non-alcohol group that they were making an error, proving that alcohol doesn’t inhibit our ability to know what we’re doing, but rather, our inability to give a sh*t.

According to Batholow, “In tasks like the one we used, although we encourage people to try to respond as quickly as possible, it is very common for people to respond more slowly following an error, as a way of trying to regain self-control. That’s what we saw in our placebo group. The alcohol group participants didn’t do this.”

Alcohol isn’t about your inability to control your actions, but your general disinterest in what they mean.

Your drunk dial was more than a butt dial

Sean Horan of “Why Do People Drunk Dial” set out to explain the phenomenon of drunk dialing with research from Ferris and Hollenbaugh’s study, “Drinking and dialing: An exploratory Study Of Why College Students Make Cell Phone Calls Intoxicated.”

In an attempt to figure out why college students drunk dial, Ferris and Hollenbaugh surveyed 433 20-year-olds and found five consistent drunk dialing motives:

1. Social lubricant: Essentially, “this motive meant that people drunk dialed because they had more confidence, had more courage, could express themselves better, and felt less accountability for their actions”

3. Coordination: Intoxicated communication is sometimes used “in order to meet up or make plans with others, or to see what others were doing”

4. Confession of Emotion: Here, individuals called “to tell a friend or romantic interest that they love and/or miss them”

5. Sexuality: This motive describes calls “due to sexual arousal, to initiate sex, or to ‘hook up’ with someone”

Whichever group you fall into, they all have one thing in common: reduced inhibitions. People drunk dial because their guards are down and their worries are gone.

Fewer inhibitions means saying how we really feel as opposed to the tight-lipped mouths we hold all day for fear of rejection or a blown cover. It’s when you can stop playing the games and get down to the nitty-gritty truth.

You were too slow to keep up with your mouth

Alcohol is a depressant that slows down our reaction time. It’s what causes car accidents, impaired judgment and, most importantly for this article, your wild verbiage.

When you’re drunk, you not only have fewer worries about what you’re doing, but you have a hard time stopping yourself anyway.

Think back to your drunken night this weekend. Doesn’t it seem like a blur? Like a chaotic whirl of events going in fast forward?

It felt like this because everything around you was going at normal pace, but you were reacting to things more slowly. Your mind was delayed.

According to the American Association for Advancement of Science, “Connections between the prefrontal cortex and the ventral striatum are still maturing, alcohol can affect those connections. As a result, [we] may do impulsive things, such as drinking and driving or having unprotected sex.”

It’s no surprise that alcohol causes us to make bad decisions; we’ve all lived through a blackout to tell our own tales.

Unfortunately, most of those bad decisions include saying something you probably shouldn’t have said because your brain just couldn’t keep up with your wild mouth.

You shed those inhibitions like you shed your panties

According to the UCSB Alcohol and Drug Program, you become moody when you drink. We all know what it’s like to have mood swings, and yet as we just learned, just because you’re under the influence doesn’t mean you don’t know that what you’re saying is out of line or just plain mean.

The vicious cycle of alcohol is the idea that we drink to forget, yet only think about it more once intoxicated.

According to Drug and Alcohol Information and Support, “alcohol may allow a person to express a long held grievance or sorrow that is real and runs deep and sore and badly needs to be spoken about.”

This may otherwise never break the surface of consciousness and just leave a person with a part of his or her life that is sore or sour and only ever expresses itself indirectly in moodiness, grumpiness or in consistent negativity.

You’re usually drinking to have a good time or to forget the bad ones. Either way you’re never going to keep in those feelings that you think you’ve buried deep in your unconscious.

Because no matter how strong or “over it” you think you are, alcohol will make sure to remind you that you most certainly are not.

Share the post "Why Drinking Brings Out The Truth. The Science Behind What You Said Last Night."

LIKE US ON FB 🙂
« Why Getting Comfortable Is Actually Very Dangerous (Despite What Your Family Says) » An Abusive Father Ruined His Son’s Life. His Daughter Found Out And Here’s What She Did About It.