A Chick-Fil-A Customer Was Shocked To See This Guy Still Working… But The Reason Why Will Leave You Speechless!

Share the post "A Chick-Fil-A Customer Was Shocked To See This Guy Still Working… But The Reason Why Will Leave You Speechless!"

Cameron Nelson stopped by a Chick-fil-A in Indiana recently when he noticed that the cashier, Jakeem Tyler, was in a neck brace and sling.

Nelson decided to ask Tyler why he was working when he was obviously still injured. Nelson then took to Facebook to share the young man’s response. 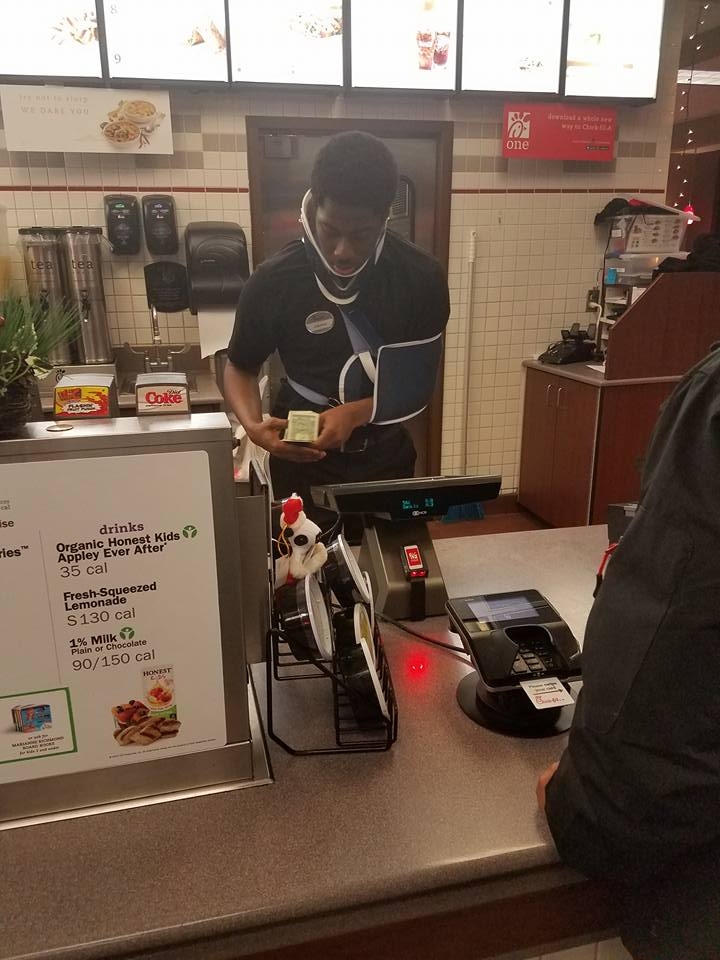 “I stopped at Chick-fil-A & decided to go in cause the drive-thru was too long, and I saw this young man working with a neck brace & a sling. We sneeze too hard & decide to call in, but he’s working like nothing’s wrong.”

“When I placed my order, I asked him what happened… he said he was involved in a car accident, but he was working cause he needs the money & also wants to feed the homeless for Christmas & needs the cash….maybe I was supposed to go in there. I think I may kick down a hundred or two on payday to help him out…he’s definitely doing it for a great cause & I was amazed he’s still working despite his condition.”

Nelson’s post has been shared over 25,000 times, he also started a GoFundMe campaign, aiming to raise $2,500 so that Tyler can afford his plan of feeding the homeless. So far, the campaign has raised $41,500.

Nelson told WTKR that he shared the post because he was inspired by Tyler.

“He did not want to let his team down by just calling in and not showing up but he also wanted to use the money for Christmas presents and to be able to feed the homeless with it as well.”

“I wanted to create this GoFundMe page to help him along in his mission and show some support.”

Tyler’s parents said he’s been saving for the good deed for months.

“They spoke extremely highly of him throughout the conversation and say he has been dedicated to helping people and is an overall stand up individual.”

Share the post "A Chick-Fil-A Customer Was Shocked To See This Guy Still Working… But The Reason Why Will Leave You Speechless!"